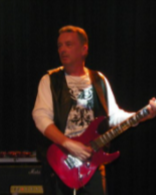 Arthur (Art) Kirkendoll, passed away on December 16, 2022, in his home. Arthur was born on December 8th, 1958 to Lesley Kirkendoll and Anna Davis in Independence, Missouri.

He relocated to California for many years. He graduated high school and attended school for computer programming.

Art had numerous skills/interests over the years. He was a skilled guitarist for many different bands (his last was Beyond Vengeance), and a black belt in karate. He was the most caring person you could meet. He would do anything to help others.

Art was a single father for many years and worked multiple jobs to provide for his son Kevin. He married the love of his life Sharon in 1995. Art then stepped in as the father of John and Ashley. If you asked Art what his greatest accomplishment was in life it would have been being a fantastic father and grandfather. You always see him in the stands cheering on his kids and grandkids. When he wasn’t with family you would find him strumming his guitar, rooting for the chiefs, and watching history movies.

There will be a celebration of life announced at a later date.

Private Disposition
To order memorial trees or send flowers to the family in memory of Arthur "Art" Kirkendoll, please visit our flower store.