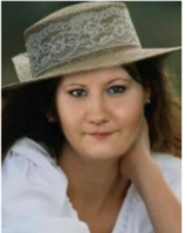 “Kandie” Canice Elaine North of Independence, Missouri passed away on October 21 st at St. Luke’s
Downtown Hospital in Kansas City, Missouri following a brief illness. She was surrounded by family and
friends who lovingly released her into God’s hands.
Kandie was born January 29, 1967, daughter of Peggy Lou Pruitt and Robert James Holt. Both preceded
her in death. She was married to “Hoss” Stuart James North on November 30,2002 and he proceeded
her in death earlier this year on April 8 th , 2022.

Kandie is survived by her sister, Gwen Haslett , of Independence Missouri and sister-in-law Elizabeth
Kerr of Little Elm, Texas. Kandie was a loving aunt to her niece, Kira Caldwell of Independence and Mary
Sims of Camdenton, Missouri. She adored her great nephews, Nick Haslett, Corey Haslett, Tristan
Haslett, Ethan Haslett and great niece Kenzie Haslett. She was also survived by her black lab fur baby,
Sassafras “Sassy” North. Kandie left behind many dear friends who called her “Sis and Aunt”.
Kandie was very creative and talented. She enjoyed baking and worked for many years at Dunkin’
Donuts, developing loyal clientele. She was an amazing cook, especially of Italian food. Manicotti and
cannoli were her specialties. She also worked at the KC Museum, at Union Station and Aisle of Capri
Casino in accounting and as a home health aide before becoming a night auditor at a local hotel.
In her spare time, ,Kandie wrote poetry and was published in two books. She developed her own line of
fragrant candles and caramel apple liquor. She loved garage sales, shopping on Wish.com and never
missed a single episode of “The Walking Dead” or its spinoffs.

Kandie’s love of children led her to create a charity Motorcycle Run “Together, We Rise”. Money raised
during the run was used to buy back packs and basic supplies for foster children who are frequently
moved without anything to call their own. This was Kandie’s passion. She was involved with Freedom of
Road Riders and Visions MC of KC with her husband “Hoss”. They loved the freedom of the open road.
Kandie’s bright light has been taken from us far too soon. She touched us as a sister, aunt and friend.
We will fondly think of her and her stories in the days ahead, knowing we will all be together again in
heaven.
A Celebration of Kandie’s life will be held at a future date.

To order memorial trees or send flowers to the family in memory of Canice Elaine North, please visit our flower store.