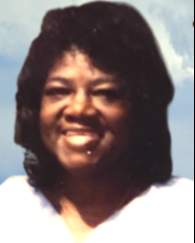 Irdella accepted Christ at an early age and was a member at Grace Assembly of God in Kansas City for many years. She received her formal education in Marvell, Arkansas, and later moved to Kansas City, Missouri. In 1972, she was employed at General Hospital. At some point, the name of that hospital changed to Truman Medical Center. She was a committed, devoted, and hard working employee at the hospital for over thirty years. She retired in 2003.

Irdella met her Soulmate, Roy Ward Sr., when she was a teenager. They were blessed with two boys. Roy Franklin and Reginald Franklin.

Irdella enjoyed cleaning, cooking, taking care of her family, and kickin’ it at the casino. The tv show “Sanford & Son” kept her laughing and she liked watching Cops all the time too. She absolutely loved going to Troost 39 Thrift Store, Swap `n Shop,     Garage Sales, and Walmart. She never drove a vehicle, so if you were lucky enough you may have been asked for a ride and would  be out all day long!

To order memorial trees or send flowers to the family in memory of Irdella Franklin, please visit our flower store.