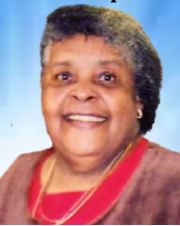 Betty J. Buford was born April 8, 1938, in Kansas City, Missouri to the union of Leroy Buford and Elizabeth Colbert-Buford as an only child.  She attended elementary and middle school in Columbus, OH before  moving back to Kansas City, MO.

At an early age, Betty was introduced to Christianity and would later in life become a very committed and devoted Christian. She loved to Worship and study the word of God with her beloved church family and leader, Pastor Cynthia Kivett. Despite declining health conditions, Betty refused to allow her physical mobility  to hinder her from sharing the gospel, so she turned to social media to share scriptures, inspiring words, and encouragement.

Betty married her first husband Edward Collins and to this union one child was born, Felecia N. Collins. Betty would later remarry Eddie Wells, and both would preceded her death.

It was in Kansas City that Betty would blossom and became affectionately known as “Mother Betty”. Betty began her career as a waitress, working in establishments where Black people were not allowed to eat thus motivating her to attain her GED.  She dedicated 25 years of service to  the McGee Radio Company before the company unexpectedly went out  of business. While this was an unforeseen trial, it did not stop Betty from pursuing better opportunities. She would move on to work for the Hickman School District in food services until she decided to go into   business for herself.

Betty was an exceptional entrepreneur who owned two businesses, a daycare, and a T-Shirt design business where she coined many of her inspirational sayings and graphics. Though she was a hard worker, nothing was more important than time spent with family. She loved and  I do mean loved the holidays. The best part was decorating and food   preparation with family but most of all, the various homemade breads, cakes, and cookies she was notably known for. (And did I mention she loved eating them as well?) Well, she did, and she would soon be nick-named “Sugar Bear” by her grandson Paul.  Betty was a diehard Kansas City Chiefs and Royals fan. After her residency in the nursing home, she purchased the largest TV and decorated her room so as to never lose spirit. Aside from the games, she enjoyed watching the professional sports draft because she enjoyed seeing the young athletes smiling after being picked. However, Betty’s greatest love of all was her 4th generation family whom she loved fiercely.

Betty expired peacefully on Saturday, September 10, 2022, and has now joined her great-grandson, Terylle M. Gorham, and great-great-grand-daughter, Serenity Gorham in the arms of God.