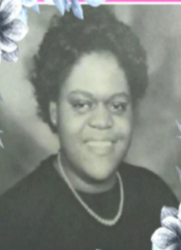 Sharon Denise Yeager was born on January 30, 1962 to Mr. and Mrs. Henry and Viola Yeager in Kansas City, Kansas at St. Margaret’s Hospital.

She was baptized at an early age by Reverend Milbon of  Zion Traveler’s Missionary Baptist Church. She attended Hawthorne Elementary School, Northwest Middle School, and graduated from Wyandotte High School in 1980 with high honors. She later went on to graduate from Kansas City Kansas Community College.

Sharon birthed three daughters, Laya, Kendal, and Asia. After moving to Lawrence, Kansas in 2006, Sharon continued to be a faithful member of Zion Traveler’s Missionary Baptist Church under Pastor Gerald Ballew  and First Lady Pearlean Ballew, until she could no longer physically attend.

Her friends from school called her “Suco”, short for suit coat, because she’d wear her father or brother’s suit coats to school. Her parents nicked named her “Neat” because her work was always done neatly. She took great pride in wherever she worked; whether that was Montgomery Ward, Carla’s Café, AT&T, City Fish, Lawrence Public Library, and finally, Maximus. She also owned her own businesses, Gifts Unlimited and Sharon’s Tax Service.

She loved to crochet, laugh with family and friends, read, cook, watch the Food Network and add things to her Pinterest board. Spending quality time with her daughters, son in-law, and grandchild brought her so much joy.

To order memorial trees or send flowers to the family in memory of SHARON DENISE ROULLINS, please visit our flower store.