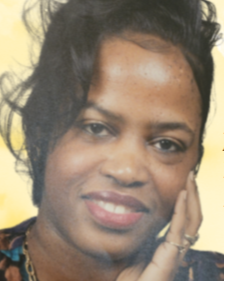 Terry got her education in the Kansas City Missouri School District, attending WW Yates Elementary School, and later graduating from Westport High School in 1975. She received her associates degree from Penn Valley Community College    in May of 1978, later attending Avila University, pursuing a  degree in Early Childhood.  Terry began her career at the  Kansas City Water Department shortly after college, where she retired after 32 years.

She was a fun, charismatic, open-minded, kind, loving, and a no nonsense soul who LOVED to talk on the phone to her friends; If you knew Terry, you knew she loved to SLEEP; she was definitely going to get her rest.  She was also a Chiefs  FAN, win or lose, you knew that if the Chiefs were on, do not interrupt unless you were calling to talk about the game. In her past time, she loved to cook, and was known for her banana pudding, mac and cheese, and deviled eggs.

Terry passed away on Friday, September 30, 2022. She was preceded in death by her mother, Marilyn Henderson; father, Frank Wright, and  grandmother, Coleta Henderson.

Terry was the loving mother of Carmen Pendelton; grand-mother of her pride and joy, Sydney Reign Mitchem; sister of Michael Paige (Andrea); aunt of Erica Paige; She also leaves to cherish her memory, her Goddaughter, and a host of cousin, and special friends.

To order memorial trees or send flowers to the family in memory of Terry Diann Paige, please visit our flower store.